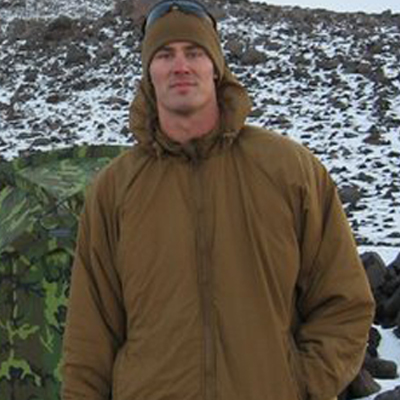 “I’m eager for a career where I lead, inspire and mentor people to achieve things they never thought possible.”

Eighteen years old and one week into his freshman year of college, Garrett was deeply impacted by the attacks on 9/11. Despite skipping football practice and meeting with a Marine Corps recruiter the very next morning, Garrett made the decision not to enlist at the time and chose to continue with football and his education; however, a seed had been planted that would only grow with time. Upon completing his senior season at the University of California, Berkeley he signed a contract to play tight end for the Green Bay Packers. Although Garrett had made it to the NFL and was living the dream of nearly every American male, he could not shake a sense of duty to join the fight in Iraq and Afghanistan. After wrestling for months with the decision of whether or not to walk away from his NFL contract in order to pursue military service, Garrett turned to Pat Tillman as a source for inspiration and joined the  Marine Corps.

Garrett’s ultimate goal as a Marine infantry officer was to lead men in combat against this nation’s enemies. Having realized that goal, he is ready to pursue the next challenge where he hopes to once again inspire and mentor others to achieve things they never thought possible. Currently working towards a master’s degree in business administration from UCLA, Garrett plans to start a company focused on utilizing proprietary technological applications that will give service members realistic and cost-effective training in order to further prepare them for real-life missions. With plans for several additional ventures in the future, Garrett hopes to employ as many veterans as possible, capitalizing on the vast range of talent and capability throughout the military and veteran community.