The Pat Tillman Leadership Summit celebrates Pat’s values and convenes the Tillman Scholars to network, collaborate and develop solutions to the challenges facing our country and communities.

In his life, Pat Tillman made his mark as a husband, teammate, soldier and brother. He believed we should always strive to be part of something bigger than ourselves.

Started in 2010, the Pat Tillman Leadership Summit powered by the NFL convenes the Tillman Scholar network to address the toughest challenges impacting our country and our communities.

Typically a three-day event, the 2020 event evolved to the Pat Tillman Leadership Series, a three-part series to celebrate the values of the foundation and fosters collaboration between scholars across their areas of impact. Keeping the best parts of the annual summit, the virtual series will be held July 18, Aug. 22 and Sept. 26 and will consist of an orientation for new scholars, timely panel discussions featuring industry leaders, and UnConference presentations from fellow Tillman Scholars.

2 p.m.: The Legacy of Pat Tillman, a conversation with Marie Tillman led by Jon Krakauer 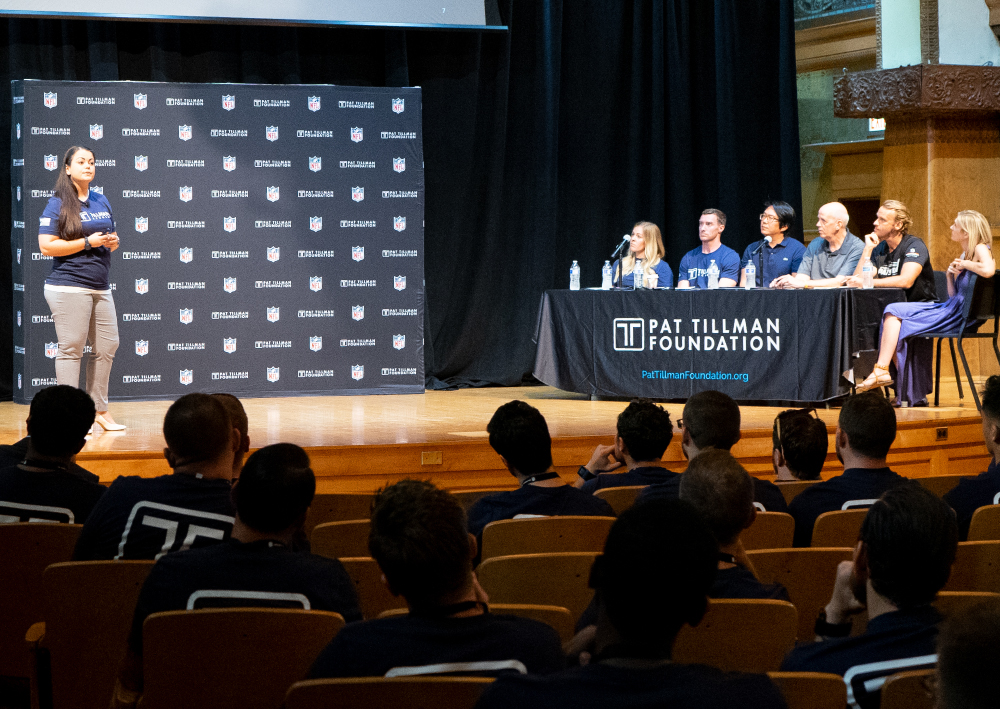 HIGHLIGHTS FROM THE 2019 Summit

A Decade of Impact

Former PTF Director of Programs, Hunter Riley, moderates a panel with Robert Anders, Lyndsey Anderson and Aaron Contreras, members of the original cohort of Tillman Scholars, as they share their reflections on 10 years with PTF.

Humble Leadership in a Community of High Achievers

R.J. Jenkins of the Columbia University Center for Veteran Transition & Integration leads a discussion with Tillman Scholars Chris Diaz, Lachiana Hamilton and Christine Mott on strategies for developing as a leader in high-performance environments.

Jonathan Due, PTF’s director of Programs & Scholarships moderates a panel of Tillman Scholars Sangki Oak, Joy Ohnstad and Blake Schroedter as they examine the challenges of meeting the health needs of particular populations through a community health-based approach.

Chico Tillmon, Executive Director of Chicago’s YMCA Youth Safety and Violence Prevention programs moderates a session with Tillman Scholars Jennifer Esparza, Patrick Robinson, Thomas Baker, Eric Chastain and Scott Swisher as they discuss how they are applying their expertise to find solutions to the complex issues of police violence and recidivism.

What’s new in the world of space? Tillman Scholars Drew Garza, Josh Pericles and George Sondecker share their perspectives on working in the fields of space policy, business, technology and initiatives.

Without loyal support, our mission would go unfulfilled. Meet our partners and sponsors who are empowering the Tillman Scholars.