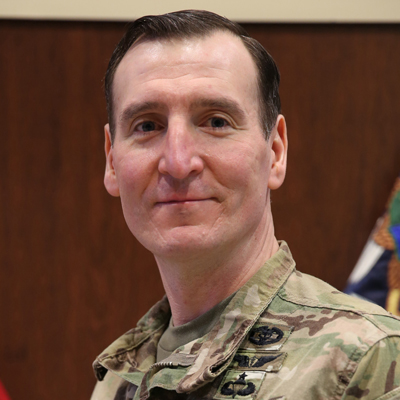 “I learned in combat that no one person is greater than the combined efforts of a team.”

In 1993, Andrew joined the Army to fulfill a desire to serve, and in return, he discovered he had something to offer the world. While serving with the 1st Battalion, 75th Ranger Regiment, he took an Emergency Medical Technician course — and knew then that medicine would become his lifelong passion.

Informed by his service as a Physician Assistant with the 75th Ranger Regiment, Andrew wants to help improve prehospital combat medicine. As a PA, he has participated in almost 600 combat missions and taken care of over 100 people at the point of injury. One of the most significant experiences of his life was losing his Army medic, during an intense gunfight in Afghanistan. Then and now, his medic’s death pushes him to continue his service and research to improve care on the battlefield.

Andrew is currently working on several initiatives, from utilizing group O low titer whole blood at the point of injury to researching and advocating for the use of ketamine at the point of injury to prevent PTSD and chronic pain. After completing his medical degree at Texas A&M, he plans to rejoin the Army and support the Department of Defense as it tries to identify better ways to address preventable death on the battlefield.