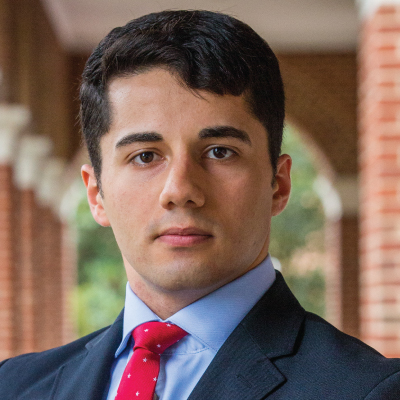 “My story is a testament to the American Dream and what this country stands for.”

Ali’s passion to serve stems from his background and experience in Iraq, the country where he was born and lived for sixteen years. After losing his father, who served as an interpreter for the U.S. military, to the forces of terrorism, Ali was afforded the opportunity to come to the United States as a refugee in August 2010. The loss of his father and love for America inspired him to join the U.S. military after graduating from high school. In 2014, Ali enlisted in the Virginia Army National Guard where he continues to serve as an Infantryman.

Having endured the hardships of war, Ali gained a meaningful and profound appreciation for the challenges the United States faces in the Middle East. After graduating from community college, Ali continued his academic journey at Christopher Newport University where he earned a Bachelor’s Degree in Political Science and National Security Studies. During his time at CNU, Ali’s fluency in Arabic enabled him to collaborate with his undergraduate mentors to conduct and present original research on several national security topics. At George Mason University, he is now pursuing a Master’s Degree with the goal of earning a doctorate in Political Science. He intends to use his education and life experiences at war and as a refugee to advance public awareness of national security issues.