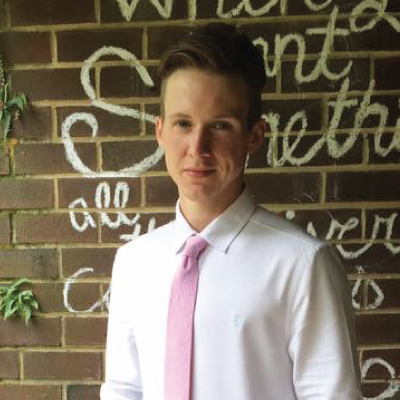 “Embracing the Navy Core Values gave me the means to become who I am totally unapologetically.”

In his quest to contribute to something bigger than himself, Landon joined the U.S. Navy in 2011. Serving as a Cryptologist, Landon was able to build a true sense of leadership and pride in the uniform he wore and the service he represented. Supporting Operation Enduring Freedom, he deployed to Afghanistan in 2013, supervising a team of joint international civilians and service members. Ultimately, Landon was discharged from the United States military for being transgender.

Taking this experience with him, and knowing there were thousands of transgender service members also serving in silence, Landon entered into LGBTQ+ advocacy in 2013, becoming a Board Member for SPARTA, an organization which works to implement policy change and inclusion for transgender and gender non-conforming service members. In 2015, Landon began pursuing his formal education with the goal to teach English to high school students.

For well over a decade, Landon has worked closely with youth who have otherwise been underrepresented in American society, whether it be because of their sexual orientation, gender identity, race, economic status, or ability. His ultimate passion in life is teaching and learning from youth, in and out of classrooms. He is currently a co-chair for GLSEN Northern Virginia where he works to ensure safe and affirming classrooms for LGBTQ+ students in grades K-12. Currently enrolled at the University of Maryland, Landon hopes to affirm, validate, and empower his future students, showing them that a truly authentic life is possible.