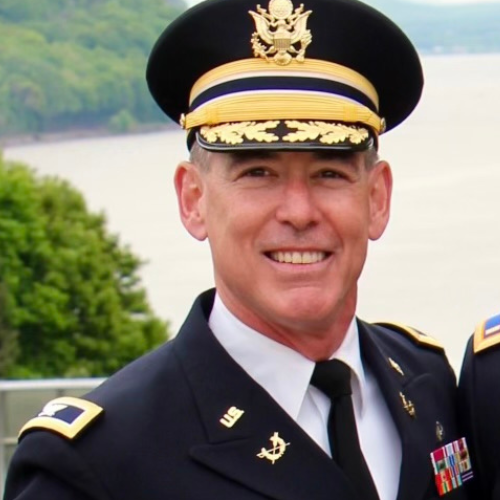 “I know what PTSD feels like and how to recover resilient meaning and secure relationships. I want to walk with clients facing similar issues as they journey towards health.”

When his alma mater became the first in Virginia to offer a post graduate program in military and veteran counseling, Kord knew what he wanted to do when he grew up. Having recently retired after 30 years as an Army JAG, he began his M.Ed while still working as an attorney for the Defense Health Agency to test the waters. Within the year, he retired from the federal government to chart a new course as a behavioral health specialist working with military and veteran communities and recently started his work at the VA’s Veteran’s Center in Alexandria, Virginia.

Kord awakened slowly to the importance of behavioral health. His infant son Michael is buried in Arlington, having taught Kord and his wife, Linda, about the expanse of a parent’s love, the deep waters of grief, and the balm of support groups. He learned more watching his adopted daughter heal from reactive attachment disorder and then starting his own healing journey from developmental PTSD. Combining his military and governmental experiences outlined below with his current master’s work and aspirational Ph.D., Kord considers serving the members of the military and veteran communities the natural next step.

Before his retirement in 2021, Kord was associate general counsel at the Defense Health Agency (DHA).  Kord joined the DHA in 2012 to support the program executive office for the defense healthcare management systems and DHA’s Health Information Technology Directorate.  He was a member of the leadership team that deployed the Department of Defense’s new electronic health record (EHR), MHS GENESIS.  Kord also served as chief legal advisor for the Federal Electronic Health Record Program Office that managed the joint deployment of EHRs for the DoD and Department of Veterans Affairs.

Kord’s Army career began in 1989 where he served for almost eight years as a prosecutor and government contracts attorney.  He left active duty in 1996 to begin his career as a federal government attorney while joining the Army Reserves.  Kord was recalled to active duty in 2009 to serve as the deputy chief of reserve management and again in 2014 to serve in Israel for the United States security coordinator as a justice sector advisor to the Palestinian Armed Security Force. Kord met Linda at The College of William and Mary back in the day and then attended the University of Richmond Law School and the Army War College.  Among his greatest joys is doing life with Linda and the kids: Philip, Rebecca, Peter, Natalie, and Maria.