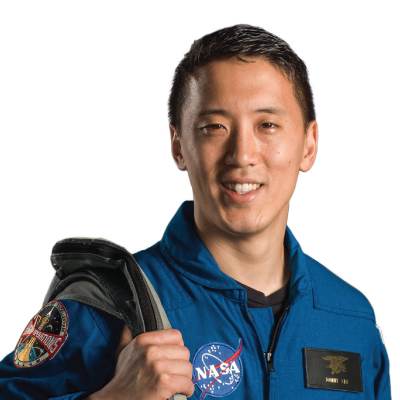 “The military for me was the basis of teamwork. That same concept is found in medicine and saving lives.”

Jonny Kim found his calling in the service of others. His desire to protect those who cannot protect themselves galvanized him to enlist in the Navy at age 18. He found his passion in medicine during his service as a Naval Special Warfare Medic in the Iraq War, where he was inspired by the skill and devotion of the physicians who saved his teammates’ lives. In 2012, Jonny received his commission and graduated with a B.A. in mathematics from the University of San Diego. In 2016, he received his M.D. from Harvard Medical School and then completed medical internship at the Harvard Affiliated Emergency Medicine Residency at Massachusetts General Hospital and Brigham and Women’s Hospital in Boston, MA. Jonny’s commitment to science and his desire to inspire future generations led him to apply to the NASA Astronaut Corps. In 2017, he was selected by NASA to join the next Astronaut Candidate Class as a Navy Lieutenant.

Jonny was awarded the Naval Special Warfare Medic of the Year in 2006 by the Special Operations Medical Association, as well as the Silver Star and Bronze Star with Valor for his combat actions and medical service in Iraq. Inspired by the sacrifices of his fallen teammates, Jonny is driven to lead his life in a way that may leave a contributing mark in this world. He will continue his passion for service, education and scientific advancement at NASA as an Astronaut Candidate when he reports for duty in August 2017. Watch an interview with Jonny to learn more about his path to becoming an Astronaut.