On the day she was informed that her husband was killed in 2004, Pat Tillman’s wife also discovered a “just in case’’ letter that he had left her before his deployment to Afghanistan as a U.S. Army Ranger.

The contents of that letter have helped Marie Tillman continue with her life for the past eight years after that devastating day. The former NFL star became one of the most high-profile casualties of the war on terror after it was determined that he was killed by friendly fire. In her new memoir, “The Letter,’’ Tillman reveals the Pat Tillman she wants the world to know beyond the tough guy exterior.

Visit NBCNews.com for breaking news, world news, and news about the economy

During an interview with NBC’s Jenna Bush Hager on TODAY Monday, Marie read aloud from the “just in case’’ letter that Pat left behind for her before leaving for Afghanistan.

“Through the years, I’ve asked a great deal of you,’’ the letter reads. “Therefore it should surprise you little that I have another favor to ask. I ask that you live.’’

Moved by the events of 9/11, Pat and his brother Kevin enlisted together in May 2002, shortly after Pat’s wedding with Marie. He was deployed to Iraq in 2003 and then Afghanistan in 2004, leaving behind the letter that has given his widow strength.

“It’s funny because that sort of simple request I feel like has taken on such different meaning over the course of years,’’ Tillman told Hager.

Read an excerpt from Marie Tillman’s ‘The Letter’

Marie now runs the Pat Tillman Foundation, which provides educational scholarships for veterans and their spouses. Last year, she married Joe Shenton, and they had their first child, Mac Patrick, in January. They live in Chicago with Shenton’s three other boys from a previous marriage.

“I don’t know if he knew what he was doing when he left that letter,’’ Tillman said about Pat. “But it was really a gift for me to know that it was okay. It was okay for me to move forward and to live my life.’’ 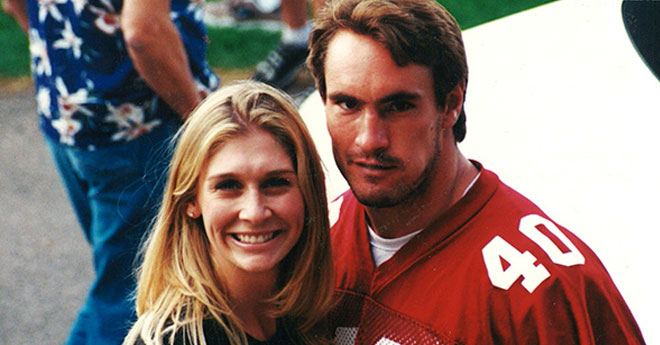