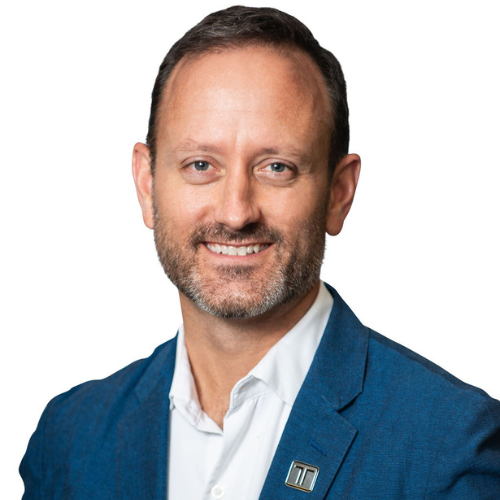 ​Dan Futrell joined the Pat Tillman Foundation as CEO in 2019, bringing over 15 years of cross-sector experience to the team. Early in life, Dan benefited from the selfless service of others as his path took him in and out of foster care, ultimately landing in California due to the diligence of a volunteer social worker in Florida. This early experience helped shape his commitment to service in his life. Raised by a single dad thereafter, Dan went on to graduate from Gonzaga University on an ROTC scholarship with a degree in business.

Over the next five years, Dan would serve 27 months in Baghdad, Iraq and Fort Lewis, Washington as a Ranger-qualified Infantry Officer. His leadership positions include platoon leader and company commander in a Stryker Brigade before he served as an aide-de-camp in a deployed Corps Headquarters in Iraq. For his service, Dan was awarded the Combat Infantryman’s Badge, the Ranger Tab, and two Bronze Star Medals.
In 2011, Dan was selected in the third class of Tillman Scholars as he completed a Masters in Public Policy from Harvard University. In Somerville, Massachusetts – a Boston metro city of 80,000 – he served for 6 years as an elected official on the school board in a 5,000 student urban school district, focusing on social & emotional education and financial management of the district’s $70M budget. He has held operational leadership roles at nonprofits Year Up and the Housing Partnership Network, in addition to product and business development roles in technology startups, prior to moving to Chicago with his family in 2019.
Outside of the office, Dan is an avid marathoner working to improve his 2:48 best from 2020. Dan is also an outdoor adventurer, most notably helping to lead a multi-year expedition that successfully located the black boxes from a 31-year cold case of a commercial plane crash at 20,000 feet in South America. The expedition was featured in Outside Magazine and gained significant national and international media attention for the 29 victims and their families.