“The vast majority of Americans care about America. Every person in their own way should do what they can to help make that change happen and to allow that change. And I think that means being open-minded, receptive and proactive in making and allowing that change.” —Nate Jester

Our Tillman Scholar Voices blog and video series amplifies the work of Tillman Scholars who actively work toward equity and justice and showing us every day the importance of leading through action. This week we highlight Nathan Jester and his work in pursuing systemic equity and fighting racial injustice through his work in law.

2019 Tillman Scholar Nate Jester has been heavily involved in the fight for systemic equity. Currently studying for the bar exam after attending Harvard Law, he is investing time and effort in small business development, affordable housing and student mentorship.

In the beginning of his career, Nate attended the U.S. Naval Academy and spent five years in the Marine Corps. His time in the service was a complex learning experience.

“The first thing I remember about joining the military is culture shock,” he said. “For me, it was shocking to come from an all-Black community in Atlanta to the majority white community of the military. But I was able to adjust and I think most people are able to adjust. Since getting out, I’ve had time to reflect on my experiences, good and bad. The bad includes some instances of overt racism for me. The N-word was directed towards me or used in my presence several times while I was in the Marines and when I was in the military in general.”

As Nate experienced culture shock and racism, he also found opportunities for learning. Through his time in the Marine Corps, he learned a number of valuable skills.

“Time management, organization, teamwork, having difficult conversations, these are all skills I can apply in whatever I’m doing. These skills helped me in law school, they helped me when I worked over the summers and I think that they’re definitely helping me now as I spend hours every day preparing for the bar exam.

For Nate, these skills allowed him to think about being in service in different ways, including using the leadership and soft skills from his service to study and bring support to his hometown of Atlanta.

Work for the Harvard Legal Aid Bureau as a student brought Nate into contact with those in the community who most needed support.

Specifically, Nate’s first case as a student attorney practicing in Massachusetts was defending a woman from an illegal eviction from her public housing. It was during this case that he began to understand the complexity and inequity of housing. He remembers realizing in conversation with his client that she had nowhere else to go.

“She was using subsidized rent, she worked but she didn’t make enough money to live in the same area where she worked and it would have been a much bigger expense for her to have to commute to work, and she was taking care of her grandchildren… It was a lot going on and moving would have been just a very traumatic life event for her,” explained Nate.

Nate realized that even if he won her case, the problem of not having a place to go remained. This inspired him to rethink affordable housing, looking for opportunities in the system to create better access to resources.

“I came up with what I thought was a novel idea about how we could create affordable housing. I looked into limited equity co-ops, cooperatives where the tenants own the management company that runs the building, and I looked into some forced savings measures and how we could use trusts in order to help people save money, and I presented that to my professor at the time.”

This Current Moment and Looking Forward

During his time at Harvard, Nate also honed in skills around communication and mediation, which opened his eyes to possibilities for how to both understand unequal structures and move forward towards positive solutions.

Specifically, Nate remembers his first time observing a mediation at a courthouse. “For about an hour, the parties could not move that conversation forward, they couldn’t get past the first disagreement in that talk that they had,” said Nate.

Watching the parties argue back and forth about who did what, Nate realized that while people are talking, they often aren’t listening but instead considering their own position. They don’t acknowledge what the other person has said or felt.

“The biggest takeaway I have from this experience was the importance of validating someone when they’re talking. It’s not agreement, it’s not giving up your own position, it’s not saying, “You’re right and I’m wrong,” it’s just acknowledging that the other person said what they said or felt what they felt.”

Nate sees strong parallels between the contentious rhetoric in the courthouse and the present debates around systemic inequity and justice.

“I think one of the worst things you can do if you’re trying to move a conversation forward is the opposite, and that’s invalidating what the other person is saying. So if someone says, ‘I’m in pain,’ it’s an invalidation to say, ‘Everyone’s in pain.’ If that happened when you went to the doctor, it would make sense to be upset. It would make sense to think that doctor doesn’t care about your pain. In the same way, if someone says, ‘My life is important,’ it’s an invalidation to say, ‘Everyone’s life is important.’ That response is upsetting because what was said and what was felt isn’t being acknowledged by the other party and the conversation stops.”

In moving forward with the fight for racial equity, Nate emphasizes the importance of listening actively and validating others. Through this approach, he believes the country can move forward, especially as individuals work to realize their aspirations for a better America.

“I want people to believe and to have faith that we can do better,” he said. “I think it’s important to acknowledge that our country is imperfect and to understand that you aren’t destroying by criticizing. You’re just acknowledging that the country can be better.” 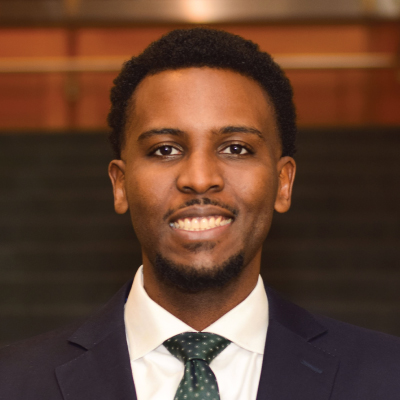